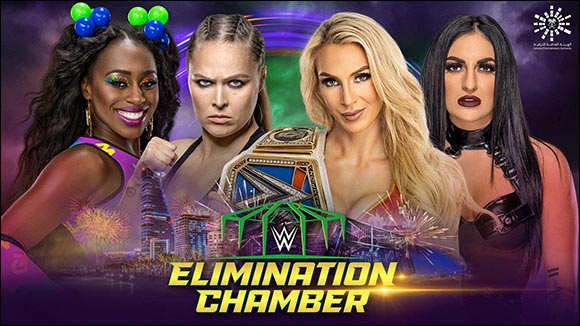 United Arab Emirates, 18 February 2022 – With merely hours until to the thrilling WWE Elimination Chamber begins on Saturday evening in Jeddah, an epic tag team showdown featuring the best of SmackDown awaits as Ronda Rousey joins forces with Naomi to lay down some justice against SmackDown Women’s Champion, Charlotte Flair and Sonya Deville in Saudi Arabia.

Following her incredible return to WWE with her victory in Royal Rumble, Rousey is set to get a first attempt to take down Charlotte Flair in Jeddah ahead of their championship showdown at Wrestlemania 38 in April. This is one of many targets on Flair’s back, with all eyes across SmackDown looking to topple The Queen and take her crown as the SmackDown Women’s Champion.

The match also features a personal vendetta for Naomi as she looks to take down Flair and Deville, following a loss to The Queen in their previous title match and Sonya’s continuous taunting in recent weeks. The encounter is something not to be missed for WWE fans across the world with a new order on SmackDown set to be established on Saturday evening in the ‘World’s Largest Superdome’.

On the men’s side of the roster, the SmackDown Tag Team Championship match is set as The Usos will enter with strong ambitions to retain their title against the invading Viking Raiders.  The epic bout has high steaks, as Jey and Jimmy Uso enter as the longest standing Tag Team Champions in WWE history and face arguably their toughest test in holding off the Raiders in Jeddah.

A surprise addition to the match card for Elimination Chamber is a collision between The Miz and Rey Mysterio, as The Miz looks to gain the respect he believes he deserves and prove he should have been chosen over Rey for the cover of WWE 2K22.