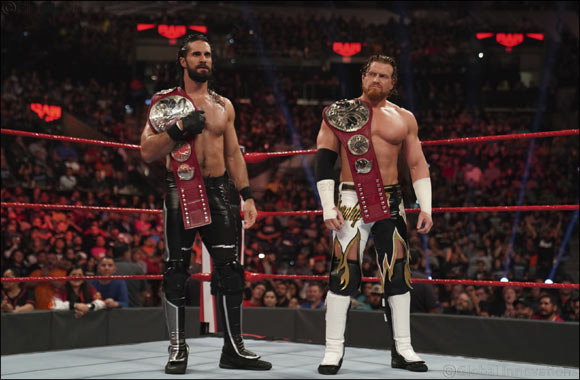 Riyadh Saudi, February 19, 2020:   The latest match announcement for WWE Super ShowDown in Riyadh has been announced, and fans in Saudi can look forward to watching The Street Profits take on Seth Rollins & Murphy for the RAW Tag-Team Championship.

Seth Rollins made Murphy a believer, and with that conviction has come the Raw Tag Team Championships. But will faith in The Monday Night Messiah be enough to overcome a more tried-and-tested team in The Street Profits?

Rollins and Murphy will try to avoid having their reign ended abruptly when they put their titles on the line at WWE Super ShowDown against Montez Ford & Angelo Dawkins. The Monday Night Messiah recruited a dejected Murphy to become his latest disciple last month, and since joining forces and becoming champions, WWE’s former Best Kept Secret is firing on all cylinders. The Street Profits, though, have been together for years and have already proven able to climb difficult mountaintops as former NXT Tag Team Champions.

Will Ford & Dawkins’ advantage in experience be enough to claim gold, or will the recently forged chemistry between Rollins and Murphy continue to overwhelm? Find out at Super ShowDown in Riyadh, Saudi Arabia, on Thursday, Feb. 27!

Tickets for WWE Super ShowDown at the Mohammed Abdu Arena on the Boulevard in Riyadh are available now via www.TicketMX.com. Ticket prices start at 25 SAR.

Discover the Secret to Radiant Skin

The Season of Fashion Revival with AIGNER

On the Occasion of International Women's Day Accor and She is Arab Partner to Ad ...

International Women's Day Marks Two Weeks Until the Climax of the Kingdom's Firs ...