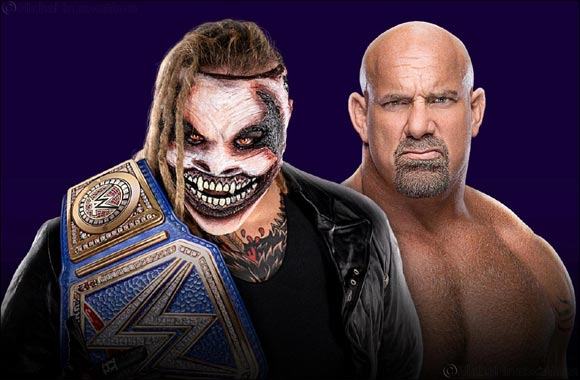 Saudi Arabian WWE fans are set for another incredible match at Super ShowDown this month after it was announced the legendary Goldberg will challenge The Fiend for his WWE Universal Championship.

Dubai, United Arab Emirates, February 08, 2020:   A Steel Cage Match between Roman Reigns and King Corbin has also been scheduled for the event, which takes place in Riyadh on Thursday February 27.

Who’s next for Goldberg? Universal Champion “The Fiend” Bray Wyatt. Might meets fright for the Universal Championship at WWE Super ShowDown.
The WWE Hall of Famer reemerged live via satellite for a special interview with Michael Cole of the Feb. 7 edition of Friday Night SmackDown. During the interview, Goldberg expressed an interest in a Universal Championship Match since he never got a rematch after losing the title to Brock Lesnar at WrestleMania 33.

Fresh off his victory over Daniel Bryan at Royal Rumble, Bray Wyatt interrupted with breaking news from the Firefly Fun House and announced that “The Fiend” Bray Wyatt had accepted the challenge.

At WWE Super ShowDown, fierce rivals Roman Reigns and King Corbin will once again go to war, this time in a dangerous Steel Cage Match where no one will be able to interfere, and only one Superstar will emerge victorious.

'
The conflict between The Big Dog and WWE’s resident monarch has grown more and more brutal, from Corbin humiliating Reigns by handcuffing him to the ring post and covering him with dog food to a frenetic Tables, Ladders & Chairs Match to their Falls Count Anywhere Match at Royal Rumble and all the chaotic brawls in between.

One week after Reigns and The Usos evened a score with Corbin by pouring pounds of dog food on him in the wake of a Six-Man Tag Team Loser is Served Dog Food Match, King Corbin stated that the only reason he ever comes up short against Reigns is because The Big Dog always has his cousins bailing him out. In response, Reigns said that he would be happy to give Corbin a match with no outside interference and challenged his royal adversary to a Steel Cage Match in Riyadh.

Don’t miss when WWE Super ShowDown comes to International Arena at The Boulevard in Riyadh, Saudi Arabia on Thursday, Feb. 27

Discover the Secret to Radiant Skin

The Season of Fashion Revival with AIGNER

On the Occasion of International Women's Day Accor and She is Arab Partner to Ad ...

International Women's Day Marks Two Weeks Until the Climax of the Kingdom's Firs ...