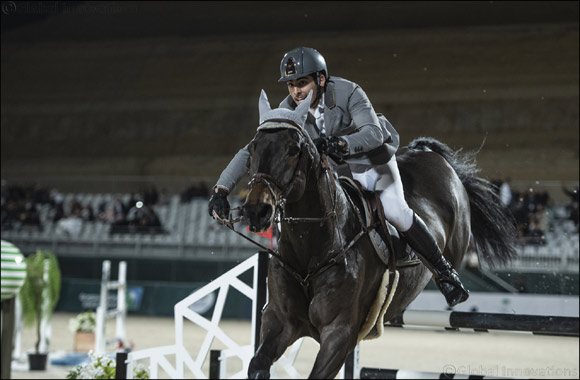 Riyadh – December 18th:   Saudi champion horse-rider Abdulrahman Alrajhi believes that the Kingdom’s riding stars will have home advantage heading into the finals of this weekend’s Diriyah Equestrian Festival – and not only because of the passionate home support.

For the 24-year-old, the Festival has provided the first ever opportunity for he and his riding peers to compete professionally at home, with the two-weekend event being Saudi Arabia’s first ever International Federation for Equestrian Sports (FEI) accredited riding competition.

That has meant that for Abdulrahman at least, it has been one of the few times his entire family have been able to watch him ride at the very top level live and in person – a backing he hopes can help him and the Festival’s other Saudi riders come out on top this weekend.

However, with this being the country’s first event, he believes that the riding conditions in Saudi – being different from may other arenas on the international circuit – may actually be a much greater deciding factor in giving the locals an invaluable edge.

He said: “For me, this is such an exciting moment. It’s really important to focus and do everything properly and at my best as this event is in my home country. It will be the first time my whole family can watch me in Saudi, which means a lot to me.

Being an FEI-sanctioned event, riders taking part in the Diriyah Equestrian Festival are competing for qualifying points for the Tokyo 2020 Olympics – one of the ultimate ambitions for every rider.

Last year saw Abdulrahman – who has jumped in around 30 locations across the world – lose out in the final of the 2018 FEI Jumping World Cup Final. While Olympic qualification is still a huge dream of his, the significance of the Diriyah Equestrian Festival on the multiple-Grand Prix winning rider is not lost, and is a history-making experience he wants to grab with both hands.

“For me, the Diriyah Festival is not about Olympic qualification or anything else,” he said.
“I am a Saudi rider who has been doing it at pro level for a long time, jumping all over the world – except from in Saudi Arabia. That’s because we’ve not had the shows or the competitions that have allowed us to compete in our country.

“For us, this opportunity and this competition makes us so proud. We now have such a beautiful and amazing show, with riders of the highest level. I hope this leads to more shows and competitions in the future and allows us to show the world we have all the capabilities to bring the top sport and competitors to Saudi Arabia.”

Abdulrahman will be arriving back at Al Duhami farm – the host arena for the Diriyah Equestrian Festival – with his three horses: Bravour, Clea and Hot Stuff, all of whom he admits to be learning from every time he rides.

Asked what he hopes the Kingdom can take away from the final weekend of the festival, Abdulrahman’s answer was clear: inspiration.
He said: “Showjumping in Saudi Arabia is really strong in terms of riders, and I hope this new Saudi Arabia, in terms of competitions and events, is an opportunity we take to grow [the sport].

“All the riders and teams are ready to put on one of the best shows on the planet. This year we have two weekends of shows. Hopefully next year we can take that up to five or six. That will support the riders and the sportspeople within Saudi Arabia.

“Countries like Germany have been doing shows like this for a long time, so have really enjoyable events to put on. In time in Saudi Arabia the crowds will come to understand the sport more and support the riders more than ever. This is a good opportunity for a new generation to come and see the sport.
“If we need to build a second and a third generation of riders to take over from the generation of Prince Abdullah, Kamal Bahamdan and Ramzy al Duhami – who have been heroes in this sport for 30 or 40 years – we need to see other riders coming through. Hopefully the Diriyah Equestrian Festival can provide that inspiration.”

The Festival is part of the Kingdom’s debut Diriyah Season – an epic month of iconic sports, entertainment and cultural events taking place on the outskirts of Riyadh. High profile events have included Saudi’s second annual hosting of Formula E, the Diriyah Tennis Cup and The Clash On The Dunes boxing match, which saw Anthony Joshua defeat Andy Ruiz Jnr.

Increased Risk of Allergies for Residents in Saudi Arabia if Hidden Dust is Left ...

WTTC Recognises Saudi Arabia's Leadership to the Recovery of the Travel & Touris ...