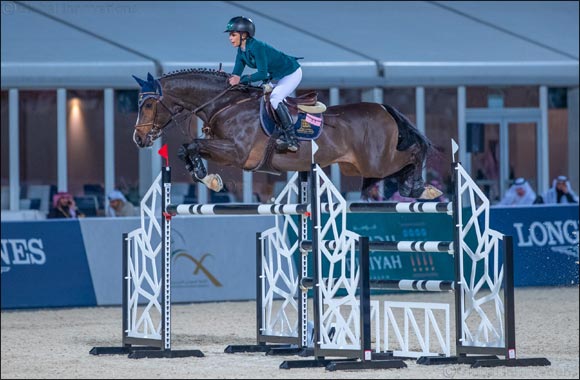 Saudi - December 14, 2019:   The second edition of the now four-star Diriyah Equestrian Festival by Saudi Aramco serves as an important step in determining which equestrians will qualify for the 2020 Tokyo Olympics Games and the 2020 World Cup. However, a more significant aspect of the competition is that it sees women equestrians compete side by side with their male counterparts for the very first time in Saudi Arabia.

Over the course of its two weekends, the Diriyah Equestrian Festival will welcome 120 riders, 150 grooms, 50 officials, 300 companions and trainers, 250 members of the club and 150 crew members. Thousands of visitors are expected to attend and will witness Saudi Arabia’s famous hospitality with the offering of a variety of food trucks catering to international cuisines, ten shops and game and federation exhibitors all within the event village.

Over a dozen Saudi women equestrians are participating in the competition, all of whom are ecstatic that their moment to shine on their home turf has finally arrived.

“This is a dream because it’s an international four-star competition and its beautiful that I finally get to represent my country on home soil,” said Lama AlAjmi, an 18-year-old equestrian who developed a passion for riding horses as a child. “For me, this is the start of Lama. This is the start for all of us. I want to be on top and the Olympics are my dream,” added Lama.

For 32-year-old graphic designer and former UN employee Sultanah Abar, equestrianism runs in her blood. Her brother Abdelkarim is competing in the Diriyah Equestrian Festival as well, marking their first time competing together in an international competition in their native Saudi Arabia.

“I started riding when I was four years old. My father is a horseman and my mother is a horsewoman. Up until now I’ve only been able to compete abroad,” said Sultanah. “Finally, we can compete at home and it makes me proud to participate in this,” she added.

24-year-old Wafa AlHasoun also expressed her excitement on this monumental first in being able to competitively participate in an international competition in her country. “We used to watch, now we participate to compete and win. We’re very excited to finally be part of this,” reflected Wafa.

The Festival is part of the wider Diriyah Season, an epic month of iconic sports events such as Formula E, top-class men’s tennis and a World Heavyweight Title fight – The Clash On The Dunes. Known as the home of kings and heroes, the stunning UNESCO World Heritage site Diriyah will also stage performances from some of the biggest music artists on the planet, including Swedish House Mafia and Calvin Harris.


Panasonic Jaguar Racing Head to Berlin for a Lockdown Showdown

Next Chapter of Medina's Growth Story Mapped Out in New Report

Make Up for Ever Introduce Two New High Performance Products Within the Aqua Res ...

Mouawad Reveals the Journey of the Extraordinary Botswana Diamond

Spanish Contingent Grows at Golf Saudi as Pablo Larrazabal is Confirmed as Lates ...

Pandora Joins Forces with UNICEF to Raise Over $1M in Aid of New One Love Initia ...