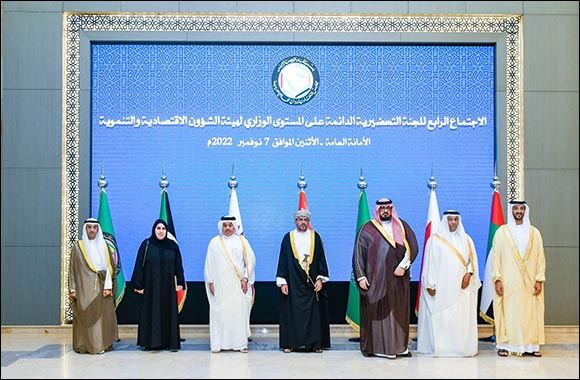 KSA Ministry of Economy and Planning'

The Ministerial Preparatory Committee of the Gulf Cooperation Council (GCC) Economic and Development Authority concluded its fourth meeting in Riyadh today, with a focus on strengthening the economic unity of Gulf countries,

Under the chairmanship of His Excellency Minister of Economy and Planning, Faisal F. Alibrahim the meeting was attended by Their Excellences from the GCC countries to discuss a number of common issues in the field of economy and development, including the GCC Economic Unity projects overseen by the Economic and Development Affairs Authority.

In his speech during the meeting, His Excellency Alibrahim reiterated Saudi Arabia’s aspiration to strengthen GCC economic unity and support the economic integration of the GCC countries. In this regard, the Authority was established as a proposal from the Kingdom to enhance cooperation in economy and Development, accelerate the pace at which economy and development projects are implemented and help achieve Economic Unity. Realizing these plans will strengthen the position of the GCC region as a global economic, financial, and investment center.

His Excellency added: 'The Kingdom's proven policies, future plans and ambitious vision place a strong Gulf Cooperation Council at the top of its priorities, in addition to strengthening Arab and Islamic cooperation in the service of the region's security and prosperity.'

His Excellency stressed the need for GCC economic unity in addressing global economic challenges in light of the current geopolitical crises and their impact on the GCC countries, reflecting the importance of strengthening joint action in addressing these challenges and taking all necessary measures to address and mitigate their effects.

Concluding his speech, His Excellency praised the integration among Gulf countries, saying, 'Under the most difficult and severe circumstances, GCC states have demonstrated their ability to overcome various challenges, thanks to God and then thanks to the wise policies and common rules adopted by the GCC states to overcome global challenges and risks.'

The meeting was attended by members of the Ministerial Committee of the Economic and Development Affairs Authority, His Excellency the Secretary-General of the Gulf Cooperation Council, Deputy Ministers of the Committee of Senior Officials, and the staff of the Cooperation Council's Office of Economic and Development Affairs Authority.

During the meeting, Their Excellences discussed many issues of common interest, including the initiatives and projects of the Economic Unity and the governance of studies on joint actions of the Gulf countries in the fields of economy and development, and the developments in studies and economic and development projects supervised and monitored by the Office of the GCC Economic and Development Affairs Authority.

The meeting also discussed the results of the statistical survey to measure the extent of implementation of the joint Gulf action’s decisions, the main indicators of economic development in the countries of the Cooperation Council.


Alliance for Metaverse and Web3 Empowerment Launches at LEAP23

NYBL Partners with Lenovo to Drive Research, Development and Innovation for the ...

Tech Mahindra to Establish its First Data & AI and Cloud Center of Excellence in ...

KSA and China Forge New Path Towards An Innovative Future with Launch of Saudi A ...

Find a Gift as unique as your Love

Passenger Demand Recovery Continued on Track in December 2022 and for the Full Y ...

Love is in the Air at Hilton Riyadh Hotel & Residences