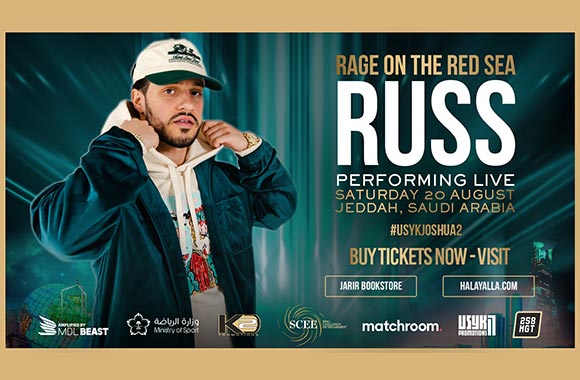 The US rapper will entertain the crowd at the King Abdullah City Arena in Jeddah on August 20th shortly before the most highly anticipated fight of the year
Jeddah, Kingdom of Saudi Arabia – 9 August 2022: American rapper Russ Vitale, commonly known as Russ, announced to perform live in Jeddah at the World Heavyweight Championship fight between Anthony Joshua and Oleksandr Usyk on August 20th.
Taking to the stage at the King Abdullah Sports City Arena later this month, this performance follows Russ’ first visit to Saudi Arabia in 2019 where he delighted his large and loyal fanbase in the Kingdom for the first time.

The twenty-nine-year-old rapper, singer songwriter, and author walks his own path, at his own pace, inspired by other famous American rappers alongside the classical rock he absorbed as a youngster. Unique in proving to the world he didn’t need a major label to surpass over 10 billion streams on Spotify/Apple Music, get on Forbes’ “30 under 30”, sellout arenas around the globe, and become one of the most popular and engaged rappers right now.

During the 2010s, Russ emerged from the Atlanta-area underground with dozens of independent singles and albums, all of which were made freely available to download. His mainstream breakthrough came in 2017 with the platinum certified Top Ten album, “There’s Really a Wolf” before cracking the Top Five of the Billboard 200 with 2018’s Zoo and 2020’s Shake the Snow Globe, before releasing the companion albums Chomp and Chomp 2. Since 2010, Russ has grown a loyal fanbase across the world and his notable popularity in Saudi Arabia is highlighted in this being his xx visit to the Kingdom to perform.
Most recently, Russ, a multi-platinum recording artist, has collaborated with Ed Sheeran for his new single “Are you Entertained”. Switching between singing and rapping, the single and visual celebrates Russ and Sheeran’s success and being at the height of their musical careers.
Music concerts in Saudi Arabia are powered by MDLBEAST through the company’s arm which aims to amplify the regional music scene through concerts, events and experiences, MDLBEAST PRESENTS.

The World Championship fight is one of the biggest Heavyweight rematches in the history of the sport, with unified Heavyweight World Champion Oleksandr Usyk facing off with Anthony Joshua on 20th August in the coastal city of Jeddah, Kingdom of Saudi Arabia.
Tickets are available from SAR375 and fight fans can get their tickets via www.halayalla.com/sa-en/tickets/rage-on-the-red-sea.

Next in Events & Exhibitions


Alliance for Metaverse and Web3 Empowerment Launches at LEAP23

NYBL Partners with Lenovo to Drive Research, Development and Innovation for the ...

Tech Mahindra to Establish its First Data & AI and Cloud Center of Excellence in ...

KSA and China Forge New Path Towards An Innovative Future with Launch of Saudi A ...

Find a Gift as unique as your Love

Passenger Demand Recovery Continued on Track in December 2022 and for the Full Y ...

Love is in the Air at Hilton Riyadh Hotel & Residences