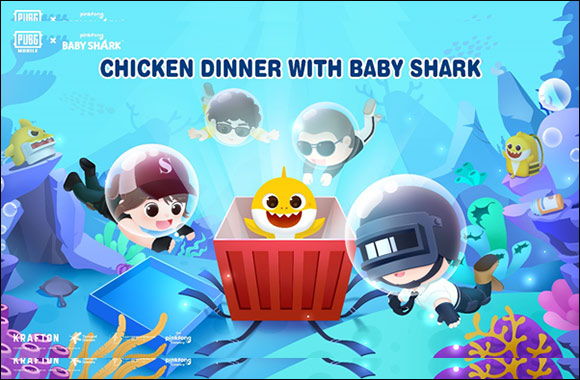 Share Home >> Technology
PUBG MOBILE and Pinkfong Baby Shark are once again partnering to launch exclusive Baby Shark-themed items in-game and release a new music video that brings the fun of Baby Shark to one the world’s most popular mobile games.
AlRiyadh – 9th May 2022– Today PUBG MOBILE is launching its second exciting partnership with Pinkfong Baby Shark, one of the most influential pop culture icons behind the most-watched YouTube video of all time. This time around, players can get their hands on a variety of different Baby Shark-themed cosmetic items, as well as enjoy an all-new music video featuring PUBG MOBILE and Baby Shark’s airdrop-hunting team!
Between May 9th and June 2nd, players will be able to grab a number of new exclusive Baby Shark items, from a motorcycle and parachute to helmets and backpacks - check out the full list below:
● Baby Shark & William Motorcycle
● Baby Shark Finish
● Baby Shark Smoke Grenade
● Baby Shark Parachute
● William Ornament
● Baby Shark Helmets
● Baby Shark Backpacks
● Baby Shark Set (Not available in North America)
● William Set (Not available in North America)
● Baby Shark Pan (Not available in North America)
Fans will also be able to enjoy a fun new music video featuring ‘The Treasure Squad’, a PUBG MOBILE and Baby Shark team who’re on the hunt for airdrops! This new song will be familiar to anyone who already experienced the global phenomenon of Baby Shark, but with a special PUBG MOBILE twist! Watch the video here.
Vincent Wang, Head of PUBG MOBILE Publishing at Tencent Games said, “We’re thrilled to be working with Pinkfong Baby Shark again, bringing colourful items and music to PUBG MOBILE. We can’t wait to see our players exploring Erangel in their new Baby Shark gear, and we hope that our new song will bring joy to everyone in the PUBG MOBILE and Baby Shark communities!”
“We are delighted to expand our collaboration with PUBG MOBILE, offering our fans another unparalleled entertaining experiences,” said Ryan Seungkyu Lee, Executive Vice President at The Pinkfong Company. 'Collaboration with one of world’s most popular mobile games builds on our commitment to making the world more joyful through content for people of all ages. We will continue to seek opportunities where we can bring joy to our fans around the world.”
Launched in November 2015 by the global entertainment company The Pinkfong Company, Baby Shark became a breakout sensation in the years following. Having been watched over 10.5 billion times, Baby Shark Dance, its iconic music video, currently sits as the world’s most watched video in history on YouTube, and its song even broke into the mainstream music scene with a 20-week streak on the Billboard Hot 100.
Baby Shark has cemented itself as a cultural icon and continues to release branded serial content across multiple industries as well as upcoming film adaptations. PUBG MOBILE previously partnered with Baby Shark in October 2021, bringing Baby Shark-themed gear and emotes to the battle royale, which allowed players to recreate Baby Shark’s famous dance moves in-game.
A major piece of cultural history, Baby Shark is once again a perfect partner for PUBG MOBILE, a game which continues to define the Battle Royale genre and consistently adds new and innovative gameplay to remain at the forefront of mobile gaming.