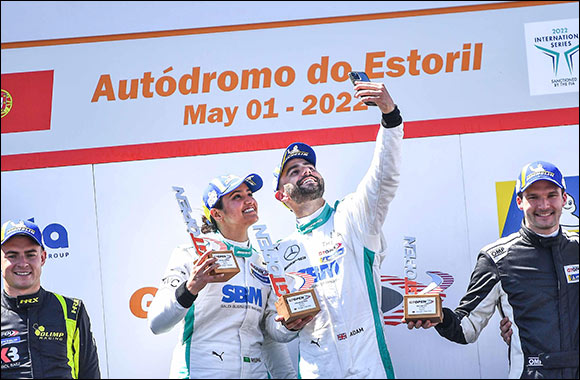 Share Home >> Entertainment
The Jeddah-born driver registers her first professional career win after securing back-to-back victories in the Pro-Am class in Portugal.
Dubai, 3 May 2022: Saudi female racing driver Reema Juffali “feels it’s going to be a good season” for her after registering back-to-back victories in the Pro-Am class in her maiden International GT Open in Portugal.
Racing in the SPS Automotive-run #18 Mercedes-AMG GT3 EVO, Reema could not have asked for a better start to her first full GT3 Series at Estoril. Sharing driving duties with British team-mate Adam Christodoulou, the duo were in top form and finished on the podium in both encounters as Reema secured her first professional career win.
Following her dream opening weekend debut, Reema said her results in Portugal will give her a lot of confidence for the rest of the season. The next round of the International GT Open will take place at the Circuit Paul Ricard in Le Castellet, France on 21-22 May.
She said: “It’s been a big weekend for me and I feel like I have progressed throughout. I’m already looking forward to Paul Ricard and I feel like it’s going to be a good season!”
She added: 'Coming into this weekend, I wasn’t sure as to how my pace would fare against the other Pro-Am drivers. In Race One, I tried to keep it consistent and clean so I could get the car back in one piece for Adam. He did a fantastic job and this is the best way we could start the season. Overall, I’m very happy and from here I want to improve on my pace and achieve this result all over again. Hopefully this is a sign of what’s to come.”
Having qualified fifth in the class in Race One, Reema carefully avoided a four-car collision on lap one which caused a subsequent red flag stoppage. When the race resumed, she ascended to 10th before handing over the reins to Adam for the remainder of the race.
With Adam continuing to rise through the ranks to fourth overall, the duo made up eight positions which was enough for Reema’s first win in GT racing.
Twenty four hours later, Reema again impressed on the track in Race Two. After taking over the driving duties from Adam, who qualified third, Reema joined the race in second overall and behind Kessel Racing’s Roman Ziemian.
Six minutes from the chequered flag, Reema encountered lapped traffic and ran wide through Turn Four as a result, slipping to fourth overall while still maintaining second in class.
However, she successfully turned a 2.2-second disadvantage into the Pro-Am lead by overtaking Roman Ziemian on the final lap to secure victory and complete her debut International GT Open weekend with a pair of podiums.
Reflecting back on her triumphant second race, Reema said: “What an epic race! It had every high and every low, the pressure was high and I’m extremely happy with the end result. When I was battling for the Pro-Am lead, I had to avoid a slower car in front of me and when I went into the gravel, my heart stopped and I thought that our race was over.
“When I rejoined we were still second in class, I could see the leading car and I drove with laser focus. On the final lap, Roman [Ziemian] spun in front of me which was definitely too close for comfort but I was able to avoid him to take the win and finish on the overall podium.”