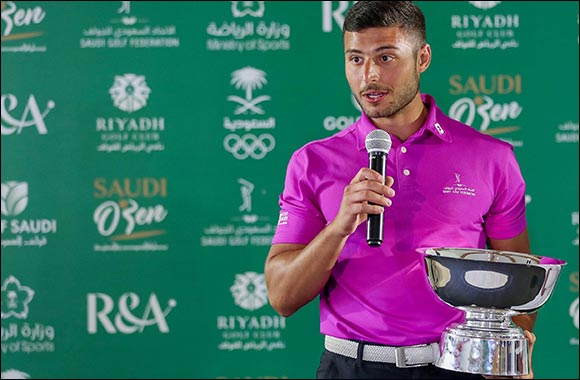 13 December, 2021, Riyadh, Saudi Arabia: Leading Saudi amateur golfer Faisal Salhab was this weekend crowned champion of the sixth edition of the Saudi Open. Collecting his trophy during a special prize giving ceremony organised by Golf Saudi, the Saudi Golf Federation and Riyadh Golf Club, Salhab finished head and shoulders ahead of his fellow competitors by posting an overall score of 205 (11 under par) over three rounds.
The tournament was open to all professional and amateur golf players in the Middle East and North Africa who are registered with any golf club and saw 88 players from more than 27 countries compete over the weekend. A cut was held at the end of day two, from which 60 players went forward to qualify for the last round.

With so much at stake and a Saudi National Team Player in the mix from the very beginning of the tournament, the Saudi Open quickly generated local excitement. Particularly when Salhab broke the course record at Riyadh Golf Club at the end of day two with a score of 66 (six under par). As a result of his performances over the weekend, not only was Salhab crowned winner of his amateur category but also the overall winner of the Saudi Open itself, beating several professional golfers also competing as well.

The Secretary-General of the Olympic Committee, Abdulaziz Al-Anezi, and the Executive Director of the Saudi Golf Federation, Muhammad Al-Issa presented Salhab with the trophy in front of delegations from the Saudi Golf Federation, Golf Saudi and the Ministry of Sports, with the Assistant Minister of Sports, Dr. Rajaa Allah Al-Selmy also in attendance.

Salhab was not the only Saudi National Team players to perform well, behind him in second place was the Kingdom’s current leading amateur Saud Al Sharif who finished in second place with an overall score of 210 strokes, alongside Spaniard Gabriel Sanz and Qatari Ali Al-Shahrani.
Salhab could hardly believe what he had achieved and was delighted at the prospect of returning to compete in next February’s Saudi International powered by SoftBank Investment Advisers, competing alongside some of the very best professional players in the world, saying: 'It is a great honour to win this title, especially in light of the great competition and the high-level of competition on show from this weekend’s golfers, which makes this achievement even more extra special for me.'

In regard to breaking the course record at Riyadh Golf Club, Salhab commented: “This is all thanks to the continuous support us National Team players receive, whether that’s from the Saudi Golf Federation or Golf Saudi, their backing enhances our chances of performing to the best of our abilities. A special thanks must also go to the Golf Saudi agronomy team who have prepared the course here at Riyadh Golf Club incredibly well. Finally, it was fantastic to see so many other players from around the Middle East come to Riyadh to compete, underlining the reputation of the Saudi Open.”

Mohammed Al-Issa, Executive Manager of the Saudi Golf Federation, said: 'We have seen some remarkable performances over the past three days. The great concentration and focus of the players contributed to an incredibly exciting competition. We are of course delighted by Faisal’s victory, which confirms the great progress the Saudi National Team has made in recent years. We want to see our players continue to win trophies in 2022, and we will watch Faisal’s progress closely at next year’s Saudi International and we already excited about hosting the seventh edition of the Saudi Open and to welcoming back all of our competitors to the Kingdom once again.”

The Saudi Open is part of a series of events that Golf Saudi holds annually to develop raise awareness of the game in the Kingdom as well as developing home-grown future talent. By holding such events, Golf Saudi is looking to increase the number of golfers throughout the Kingdom within all age groups and demographics. By working with other sports federations and the Ministry of Sport, Golf Saudi, which is the commercial development arm of the Saudi Golf Federation is looking to underline the wider benefit of sports participation more generally as part of Saudi Arabia’s progress towards its Vision 2030 goals to improve its citizens quality of life.