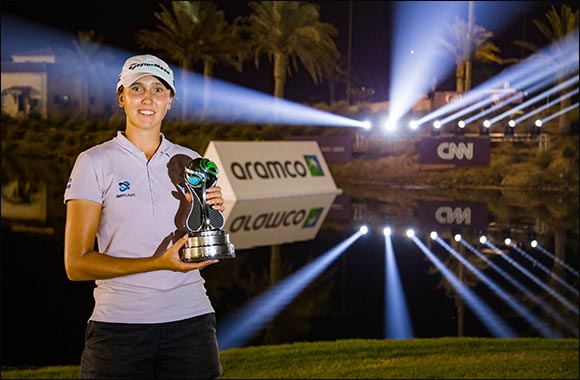 Share Home >> Entertainment
• Took two play-off holes against Lydia Hall but Dane kept her cool to bag title for her fourball
• Team Pedersen comprised the Dane, Hannah Burke (ENG), Krista Bakker (FIN) & amateur
• Slovenia’s Pia Babnik beats Olivia Cowan to Aramco Team Series – Jeddah’s individual title
November 13, 2021: Emily Kristine Pedersen defended her Saudi Arabian team title with a play-off victory in the Aramco Team Series – Jeddah, with Slovenian teenager Pia Babnik bagging the tournament’s individual title.
The Dane saw off Wales’ Lydia Hall over two extra holes at Royal Greens Golf & Country Club in King Abdullah Economic City to secure the title for Team Pedersen – the Solheim Cup star, Hannah Burke of England, Finland’s Krista Bakker and Ahmed Al Subaey, the team’s amateur player.
Both Team Pedersen and Team Hall – captain Lydia, Welsh compatriot Becky Brewerton, Brazilian Luiza Altmann and ex-NFL star amateur team-mate, Victor Green – finished on -51 following 54 holes on the Red Sea coast.
After the captains could not be separated on their first play-off attempt down Royal Greens par-five 18th, Hall found the water going for the green in two second-time around.
Pedersen – whose tee-shot had her placed perfectly in the middle of the fairway – capitalised, landing her approach inside ten feet before holing the eagle putt, bagging her team $150,000 prize money.
“It means a lot to win again,” said Pedersen, whose victory last year came in the event that proved to be the precursor to the Aramco Team Series, the Saudi Ladies Team International.
“I came back to Saudi Arabia hoping to get a win again and its just amazing to do it. I obviously love it around here so it’s just great. We had a lot of fun as a team, and it was a big team effort. We kept the energy high and kept each other high, so it was really just a great week.”
On the play-off – which Pedersen also required a year earlier to see off England’s Georgia Hall in 2020’s debut Aramco Saudi Ladies International presented by PIF – the 25-year-old added: “Obviously I had a lot of good memories from the play-off last year, even if it was a little bit harder for me to see this time! But it was fun. I feel like I know this course really, really well now, so I was happy.”
English team-mate Hannah Burke only returned to golf last year after a horror Achilles injury, which kept her out for the entire second half of the 2019 LET season.
Asked how it felt to now stand in the winners’ circle, six years after her first and only Tour victory, Burke said: “It feels really, really good – kind of a bit surreal. I’ve had a couple of tough years, so this is absolutely amazing and I’m loving it.”
Burke continued: “The injury in 2019 took its toll, not really just physically but mentally, financially – I kind of had a year out, made zero money, spent a lot to rehab to get back to where I needed to be, it was mentally draining. It’s been a massive battle, really – I’ve been close to calling it a day, truthfully. So this is big. I’ve had massive support back home from all my family, friends and from my coach Brian here, who has backed me all the way. Thanks to everyone.”
There was drama to the last in the Aramco Team Series – Jeddah’s individual format.
Germany’s Olivia Cowan headed into 18 with a two-shot lead, where a par five would have almost certainly earned her a first career title – on a hole where a day earlier she found the water attempting to reach the green in two.
However, it proved to be Groundhog Day for the 25-year-old, as her try at setting-up an eagle putt once again went wet, and she scrambled to a closing seven and 15-under-par total.
That opened the door to teenager Pia Babnik, who playing in the group behind the German needed only a par of her own to seal a play-off.
But the Slovenian went one better, lasering a wedge to eight-foot before rolling in what proved to be the winning putt for a birdie four and -16.
“It feels amazing to have won,” said the 17-year-old. “I must admit I didn’t know what was going on in the group ahead, so I was just trying to play my game coming down 18. It was my amateur who came and told me that I had the putt to win, but I wanted to make it anyway for the team. The whole format of the Aramco Team Series is very relaxed and it’s definitely more fun. I was out there just trying to make birdies for the team.
“I’m really happy with my game and how I played today and over the last two weeks. I’ve loved playing out here in Saudi Arabia and look forward to coming back.”
The Aramco Team Series – Jeddah was the last of four new $1million team tournaments added to the Ladies European Tour this season and followed events in London, Sotogrande and New York.