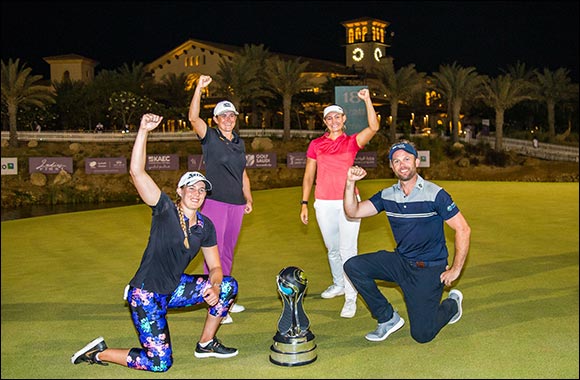 Share Home >> Entertainment
• Pedersen pockets $207,500 after winning both the SLTI’s team and individual events following her victory at the weekend’s debut Aramco Saudi Ladies International presented by PIF
• Triumph also means 24-year old wins the Ladies European Tour’s 2020 Race to Costa Del Sol
• Australian teenager Stephanie Kyriacou breaks course record with stunning final round 63 – the lowest round by any women in Saudi Arabia
• HE Yasir O. Al-Rumayyan: “This has been an historic time for Saudi Arabia and women’s golf”
21 November, Jeddah, Saudi Arabia: Emily Kristine Pedersen crowned an unbelievable two weeks in Saudi Arabia with a double victory at today’s inaugural Saudi Ladies Team International.
The outstanding 24-year-old surged to victory in the team competition, the individual event and also sealed this season’s Ladies European Tour’s Race to Costa Del Sol rankings.
Last week saw the utterly dominant Pedersen make history as the first winner of the Aramco Saudi Ladies International presented by PIF – the first professional women’s golf event ever held in the Kingdom, which took place at Royal Greens Golf & Country Club.
Her unprecedented sweep marks an incredible turnaround for the Dane following her disastrous opening round of 82 at the OMEGA Dubai Moonlight Classic two weeks ago.
“I obviously really, really like the course here,” said Pedersen. “Our tactics were great for the two weeks and we stuck to it. I can’t believe what’s happened this season. I was confident I could get back to where I was but I couldn’t imagine that it would be like this.
“It’s been a strange year for all of us with COVID but while everyone’s saying it is the worst year, I’m having the best year ever, so that’s a little weird but I am really happy.”
Team Pedersen consisting of Michele Thomson (Scotland), Cassandra Hall (RSA) and talented amateur Matt Selby snatched victory in the team event with a closing birdie on the 18th to finish on 40-under par and a share of $97,500 for the professionals.
“It’s been unbelievable, I was absolutely delighted when I heard Emily picked me,” said Thomson.
“She’s one of the best players I think I’ve ever played with and we just wanted to make some birdies out there today. Although I am about ten years older than her, I have learnt a lot from her and I’ve gained a great friend this week.”
Team Kyriacou (Steph Kyriacou, Pia Babnik, Manon Gidali) and Team De Roey (Manon De Roey, Eleanor Givens, Linette Littau Durr Holmslykke) finished one back on 39-under for a share of second.
Lowest team round of the day was Team Mehmet, who combined for a sublime 21-under par in near perfect conditions in King Abdullah Economic City.
Team captain Inci Mehmet said: “We had loads of fun out there as a team. Marta holed out on 13 and I holed out on number ten with Jenny making lots of clutch putts, so we dovetailed brilliantly.”
The players have also been competing for an individual prize this week as part of the Ladies European Tour’s Race to Costa Del Sol, with $500,000 total prize money on offer.
Pedersen’s final round 67 sealed victory at 14-under to finish two shots head of Stephanie Kyriacou, Anne Van Dam and Luna Sobron Galmes. Outstanding 19-year-old Kyriacou capped an impressive Saudi Arabian display by setting a new course record with a brilliant 63 that included two eagles and five birdies. The Australian, who was an amateur at the beginning of the year, all but sealed the Rookie of the Year prize with her performance.
“It was a obviously a great day,” said Kyriacou. “I started with a birdie, wanted to keep the momentum going then holed out on the 14 and then chipped in on the last for eagle which was a great way to finish the year.
“I hadn’t thought about the Rookie of the Year title until my friend told me about it and then was like, ‘That’s cool, it would be great to win’. It’s a once in a lifetime opportunity.”
The English trio of Charley Hull (-9), Eleanor Given (-8) and Georgia Hall (-8) all shot 68s to finish their Saudi Arabian debuts strongly.
It has proved a history making week for professional women’s golf in Saudi Arabia – successfully hosting back to back Ladies European Tour events for the very fist time.
H.E. Yasir O. Al-Rumayyan, Chairman of the Saudi Golf Federation and Golf Saudi, said: “This has been an historic time for Saudi Arabia and women’s golf, and we could not be prouder. I am confident this won’t be the last we hear of exciting team formats in the professional game.”
Saudi Ladies Team International Results:
Team:
Team Pederson (-40), Team Kyriacou (-39), Team De Roey (-39), Team Mehmet (-37), Team Pace (-36), Team Dimmock (-33)
Individual:
E. Pederson (-14), S. Kyriacou (-12), A van Dam (-12), L. Galmes (-12), C. Hull (-9), E. Givens (-8),
G. Hall (-8), Ursula Wikstrom (-7), Johanna Gustavsson (-7)