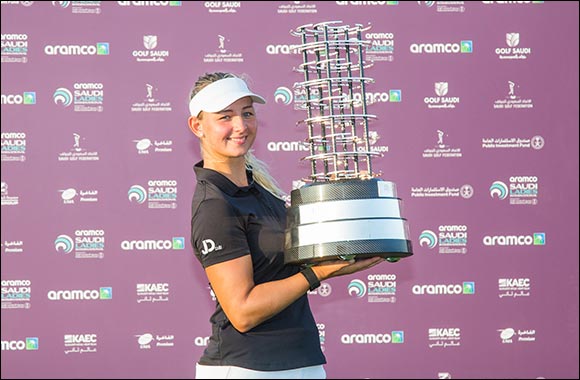 Share Home >> Entertainment
• Emily Kristine Pedersen holds off Georgia Hall in tense play-off to win Saudi Arabia’s first professional women’s tournament and claim $150,000 winner’s cheque
• Pedersen’s stunning approach shot on the final hole: “It was one of the best shots I’ve ever hit”
• England’s Georgia Hall finishes runner up ($90,000), Sweden’s Caroline Hedwall in third ($60,000)
16 November 2020, Jeddah, Saudi Arabia:  Denmark’s Emily Kristine Pedersen held her nerve to secure a dramatic play-off victory over Georgia Hall to win the inaugural Aramco Saudi Ladies International presented by PIF.
The pair went head-to-head in a thrilling finale at Royal Greens Golf & Country Club that required an extra hole’s play to find a winner after Pedersen put a three-wood to 12-foot on 18 with “one of the best shots I’ve ever hit” to bag the birdie she needed to tie England’s Hall at ten-under par.
More drama ensued in the play-off as Hall’s costly approach found water, with Pedersen’s miraculous chip close enough to secure Saudi Arabia’s first historic title and $150,000 winner’s cheque. The victory in King Abdullah Economic City increases her lead in the Race to Costa Del Sol rankings on the Ladies European Tour.
Asked about her masterful strike into the par five 18th to take the tournament to a play-off, Pedersen said: “It was really good. After hitting it I said to my caddie Mikey that it felt great. I knew I had to make a birdie and I just kind of felt the shot to take on. It was one of the best shots I’ve ever hit, because it put me in that position, and I ended up winning in the play-off.”
Hall had the advantage of a three-shot cushion with five holes to play but gutsy Pedersen clawed her way back following a rollercoaster round that included six birdies, four bogeys and one double bogey.
“I dropped a couple of shots on the front nine but then I got it back and started making a few birdies, which got me confident, added Pedersen. “I was just plugging away and I knew Georgia was playing super steady.”
“I’m so happy to be the first winner of this event.  It’s been such a fantastic experience to be here in Saudi Arabia with all the players here.”
Georgia Hall said: “I played well today even though it was certainly windier than yesterday. It was just a shame my putt on 18 didn’t go in. Emily hit an amazing shot on the last hole in regulation and it was very brave. I am really pleased for her as she’s a really nice girl.”
Solheim Cup teammates Ann Van Dam (-8) and Caroline Hedwall (-7) showed their class on Sunday to finish in third and fourth respectively after impressive final rounds in the 60s.
Wales’ Lydia Hall, who had been rock solid all week, struggled over the tricky closing holes with a triple bogey on 14 derailing her hopes of a fairytale Ladies European Tour comeback. Low round of the day came from Switzerland’s Morgane Metraux, whose stunning run of nine birdies in 16 holes – following a triple-bogey on the second – led her to a 67, finishing on -5.
Maha Haddioui, the first Arabic player on Tour, closed her tournament off strongly posting a two-under round of 70 to finish on +3. India’s Aditi Ashok closed on three under for a share of joint 11th after struggling on the closing holes.
Attention for the players now turns to the $500,000 Saudi Ladies Team International (17th-19th November) – a first-of-its-kind tournament where 36 team captains recruit their players using a live NFL-style draft system, before competing for a share of $500,000 prize money.