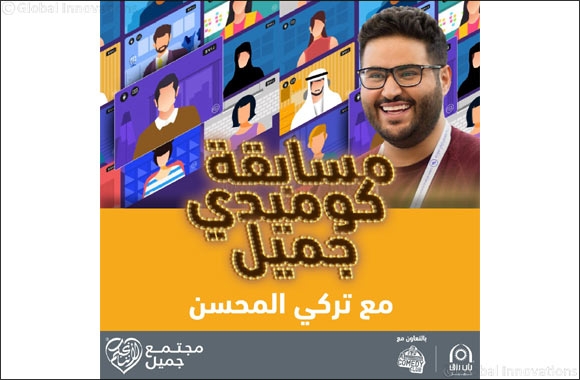 Share Home >> Entertainment
• Aspiring comedians from Saudi Arabia and beyond can participate in the Comedy Jameel competition and win weekly prize money of up to SAR 5,000
• A monthly grand prize of SAR 25,000 is awarded for the top-rated video
• First episode will be broadcast live on Monday July 6, 2020
Jeddah, Saudi Arabia | July 2, 2020:   Comedy Jameel, a competition to support and inspire comedians in Saudi Arabia and beyond, was launched by Bab Rizq Jameel, an initiative of Community Jameel, in collaboration with Al Comedy Club. The competition is open to performers of all levels and will be broadcast live, hosted by the Saudi content maker Turki Almohsen, on Community Jameel’s YouTube channel on Mondays at 9:00pm KSA time, from July 6.
The YouTube show will include entertainment and interactive segments, during which selected videos are broadcast for public voting, and the previous week’s winners announced. Applicants to the competition may register and upload their videos at the Comedy Jameel competition website, comedyjameel.com, before midnight KSA time each Friday. Selected videos will be shown during the YouTube show, which includes entertainment and interactive segments, and the audience may vote for their favourite videos online. The top three videos chosen by the audience are announced live on the show and awarded cash prizes of SAR 5,000 for first-place, SAR 3,000 for second, and SAR 2,000 for third. A monthly grand prize of SAR 25,000 is awarded for that month’s top-rated video.
The YouTube show’s host is the celebrated Saudi artist, director and content maker Turki Almohsen, whose unique comic content on social media has attracted over one million followers to  his own YouTube channel.
Al Comedy Club, which is collaborating on the Comedy Jameel competition, is the first comedy club in Saudi Arabia, opening in Jeddah in 2012. Supported by the General Entertainment Authority in Saudi Arabia, Al Comedy Club was established and is managed by Yaser Bakr.
Hassan Jameel, President, Saudi Arabia of Community Jameel, said: “Comedy Jameel would uncover a wide variety of comedy talents, bring them into the public spotlight and provide further job opportunities”.
A key objective of the competition is to support the emergence of comic talent in the Arab world, and to provide opportunities for performance and mentorship for aspiring comedians. Providing opportunities for young men and women to achieve their dreams and achieve sustainable livelihoods is core to the mission of Bab Rizq Jameel, the flagship livelihoods initiative of Community Jameel. In Saudi Arabia and Egypt, Bab Rizq Jameel has helped hundreds of thousands of men and women through programmes ranging from recruitment to microfinance, and innovative projects for staff at football stadia, and rural taxi drivers. Bab Rizq Jameel also delivers the MIT Enterprise Forum Saudi Startup Competition, a competition to support aspiring entrepreneurs with seed funding, bootcamps and mentorship.
The competition is open to beginners and amateur comedians of all nationalities, aged 12 years and above. The videos must be new, in Arabic, and must not include any material related to religion or politics, taboos, negative behaviours, or offences to any person or party. The videos should also be of high quality and should not exceed one minute.