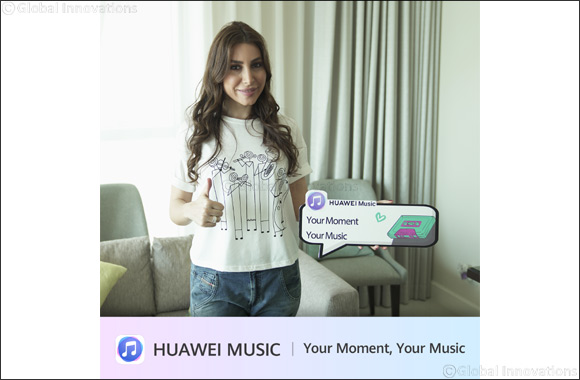 Riyadh, KSA, 7 June 2020:  Huawei is offering music fans across Saudi Arabia the chance to win a wide range of prizes by logging onto the HUAWEI Music app on their smartphone and watching an exclusive interview with YARA.
The Lebanese singer has won a huge following with her brand of music and now her fans in the Kingdom can learn more about her by watching an exclusive interview on the HUAWEI Music app.

As her legion of fans is aware YARA is stuck at home like everybody else. So, Huawei Music decided to help YARA connect with her followers by making an exclusive interview. The Lebanese pop star was kind enough to give her time and answered many interesting questions as well as giving her recommended playlist, made for her fans.

The HUAWEI Music app is available to Huawei and HONOR users and is part of a wider and ever-growing eco-system of features and services on the HUAWEI Mobile Services platform.

To take part, users simply open the app on their Huawei or HONOR smartphones and go to the interview. Once they watch the video, they will be in with a chance to win a variety of Huawei devices and products all signed by YARA herself.

HUAWEI Music has been gaining popularity recently as the platform continues to evolve with new and exciting content. Now users can also take advantage of a special three-month free trial and experience first hand how a growing number of users are enjoying music on their Huawei and HONOR smartphones.
Once users are signed up, they can enjoy their favourite music at higher audio quality above 320kbps and stream millions of tracks free of ads. In addition, new featured sound effects have been added and there is a host of new content including Ahwet El Madi –Elissa; Stuck with U –Ariana Grande/Justin Bieber; Baashaek –Assi El Hallani.

YARA rose to fame after winning the LBC music competition 'Kass el-Nojoum' in 1998 by singing 'Awedak.' Since 2004 she has released five hugely popular albums including “Twassa Feyi” and “La'ale' Khaleejiya.”
The competition runs until June 16th.