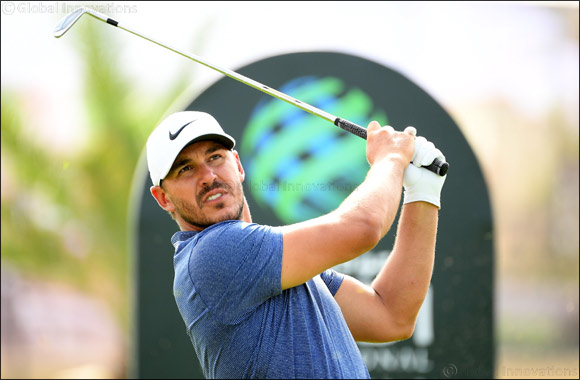 10 Reasons Why You Can't Miss This Weekend's Saudi International: From Superstar Golfers to the World's Best Djs – Get Planning for the Ultimate Day Out!

Share Home >> Entertainment
Jeddah, Kingdom of Saudi Arabia - January 26th 2020:    This week sees the best golfers on the planet descend on the Kingdom for the second annual Saudi International golf tournament, powered by SoftBank Investment Advisers.
And the world-class golf is just one of many big reasons to attend this weekend’s event, held in King Abdullah Economic City (KAEC) from Thursday through Sunday, where an action-packed four-days will have everything from awesome live music to pulse-racing E-sports, a food-lovers’ paradise, and hours of inflatable-fun for kids of all ages!
Here’s ten reasons a visit to Royal Greens Golf & Country Club – host course of the Saudi International – guarantees The Ultimate Day Out and an unmissable weekend:
1. Strongest golf field in the Middle East - A total of 132 players will battle it out for a share of the US$3.5m prize fund on offer. Defending champion Dustin Johnson, world number one Brooks Koepka, five-time Major winner Phil Mickelson and US Masters winner Patrick Reed are just four of the box office US names competing. Adding to the star – studded line up, British Open Champion Shane Lowry and Ryder Cup heroes Henrik Stenson and Sergio Garcia – who boast a further two Major titles between them – will lead the European contingent of household names.
2. Sensational music line up – A stellar line up has been announced to entertain music aficionados of all tastes. Running from January 30 – February 1 in King Abdullah Economic City (KAEC), it will feature world – class artists including DJ duo Dimitri Vegas & Like Mike, legendary DJ Marco Carola, rock icon Bryan Adams, DJ Zedd and Latin sensations Gipsy Kings and Luis Fonsi. Get ready to swing, salsa and dance!
3. An event for all ages – Looking for a fun day out? Then look no further as the tournament becomes a must-visit for families, friends and groups looking to have a memorable day out thanks to its experience-packed Entertainment Zone. Spread over a huge outdoor area, the zone will allow visitors to try everything from gourmet burgers, shrimp and ice cream, to hyper-speed, mega-real VR races through the streets of Diriyah in a Formula E car, to relaxing with a coffee watching the golf play-out on the Saudi Aramco Big Screen – or jumping through an enormous inflatable assault course!
4. See the world’s No. 1 golfer – Watch the current number one-ranked golfer in the world, Brooks Koepka, compete for the converted Saudi International trophy and show off his incredible golf skills. The record – breaking player won the U.S. Open in 2017 and 2018, and the PGA Championship in 2018 and 2019, becoming the first golfer in history to hold back-to-back titles in two Majors simultaneously.
5. Learn the game – Always dreamed of becoming a pro golfer or just looking to pick up a new hobby to kick start your New Year’s resolutions? Then Saudi International is just for you, with fun and interactive activations to get into the swing of things and learn the fundamentals of the game. Golf is an excellent outdoor activity for those who want to stay fit without being too exposed to physical injury.
Golf places strong emphasis on good sportsmanship, self-discipline and behaviour and, therefore, is an ideal medium through which children and young people can further develop personal skills such as honesty, respect, co-operation, perseverance, concentration and self-motivation, which they can carry through to adulthood. Why not give it a try?
6. Royal Greens Golf & Country Club course – The Royal Greens & Country Club course is the Kingdom’s premier 18-hole championship golf course and clubhouse, boasting a panoramic view of the Red Sea coast as its spectacular natural backdrop which saw the venue voted the ‘World’s Best Golf Clubhouse 2019’ and ‘Best Course in Saudi 2019’ by the World Golf Awards.
7. Supporting local talent – Come down to support the rising local talent as three Saudi players have qualified to compete in the lauded Saudi International tournament. Amateur golfers Saud Alsharif and Faisal Sadhab be joining Othman Almulla - the first Saudi professional golfer and the first Saudi Arabian and youngest Arab amateur golfer to qualify and play in the Dubai Desert Classic, a prestigious PGA European Tour eventv.
8. Kids activities – The tournament has an incredible kid friendly zone with tons of fun and activities for the little ones. The ‘Bounce’ area will be a must visit – as it is entirely inflatable! The air-filled assault course will have obstacles, tunnels and slides guaranteeing hours of hilarious fun, for children and adults. If it all proves too much for the kids, then the Play & Party zone for three to nine-year-olds is a safe stop after. With plenty going on for children of all ages – we promise they will leave with a smile!
9. Global players – Who are you rooting for during this year’s tournament? With players from countries including South Africa, England, USA and Australia there’s plenty of choice, whether you’re supporting one of your countrymen or cheering on your favorite player from another nation. Either way, it will be an unforgettable tournament with lots of action and unmissable moments.
10. King Abdullah Economic City - Announced in 2005 by the late King Abdullah, the city – commonly referred to as KAEC is located about an hour’s drive from Jeddah. It comprises King Abdullah Port, residential districts, the Haramain Railway district and an ‘Industrial Valley’. There are many activities on offer including go – karting and fun outdoor activities at Juman Park including tennis, kids' play area and splash pad zone, sand volleyball court, toddler play zone, multi-use court and mini golf facility.