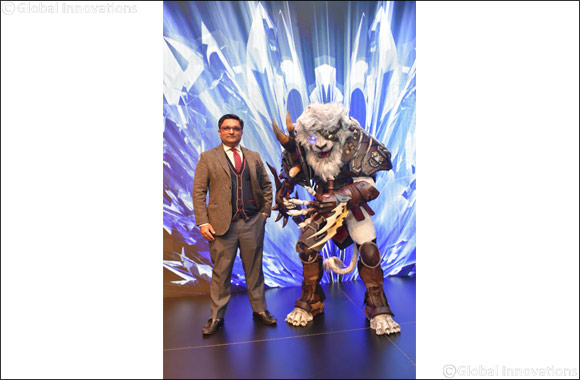 Riyadh, 7 December 2019:    The best gamers across the Middle East and North Africa (MENA) region began their battle for supremacy in the League of Legends as the inaugural Nexus Festival kicked off in style on Thursday night in Riyadh.

Hosted by Riot Games for the first time in the region, hundreds of people gathered at Riyadh Boulevard to witness the opening of the three-day event that combines gaming, entertainment and attractions. It is part of an initiative of Saudi General Entertainment Authority (GEA).

Among the teams in action were Levant’s Nasr eSports and Saudi Arabia’s EGZ, who are two of the eight sides vying for glory in the showpiece 5v5 Summoners Rift competition after coming through November’s qualifying stages.

It is one of six competitions taking place during the three-day event with the teams aiming to claim a slice of the USD $2 million prize money.

In Match 1, Nasr eSports won 2-0 and captain Mohammed Al-Adham said the team is relishing the opportunity of testing themselves against the region’s best sides.

He said: “A competition like this is really good and by far it’s the biggest event that we have taken part in. It is really competitive and with many good teams wanting to win, every match will be close.

“Riot Games has made a great move to host the Nexus festival here in the Middle East. There are many talented gamers in this part of the world and it is an opportunity to showcase our talent and develop our skills.”

After EGZ overcame GCC’s Shot 2 Kill in their opening match, captain Mishal Al Barrak said the Nexus festival can help bridge the gap between the best regional and international sides.

He said: “We have only been competing since September but a lot of us have been playing League of Legends since the third season.

“As a team, we are really proud to be playing League of Legends in our home country. It’s a big thing for us and it’s great that our friends and family can watch us play. We really want to thank Riot Games for launching an event like this for us. Having the chance to play against other strong sides in the region will help us become better gamers and be able to compete against the international sides.”

The day’s other competitions included the qualifying rounds for the 1v1 and Team Fight Tactics as well as the Cosplay.
Onur Tamer, METAI General Manager at Riot Games, said: “We could not have asked for a better start to the Nexus Festival here in Riyadh. The turn-out for the first day was incredible and we saw people of all ages enjoying the gaming and activities. This helped create such a vibrant atmosphere during the evening.

“We saw today there is exceptional talent in the gaming industry in the Middle East and North Africa (MENA) region with some closely-fought and entertaining matches and this was great viewing for the public. As we enter the latter stages, we can expect more of the same for the remaining two days and I encourage everyone, whether they’re gaming fans or not, to attend the Nexus Festival.”

The Nexus Festival will continue on Friday with the winners’ bracket of the final 5v5 among the events taking place as well as a concert by DJ Mako and electronic music act Crystal Method.

On Saturday, the winners of the six competitions will be decided while international music star Jason Derulo will also take to the stage.

Tabreed increases its stake in Saudi Tabreed to 28%

More Than Half of KSA Parents Don't Know the Legal Requirements for Child Seat B ...

Under the Diamond sponsorship of SABIC & Advanced Petrochemical Company

Saudi Fund for Development Supports the Government of Kyrgyzstan in Developing K ...