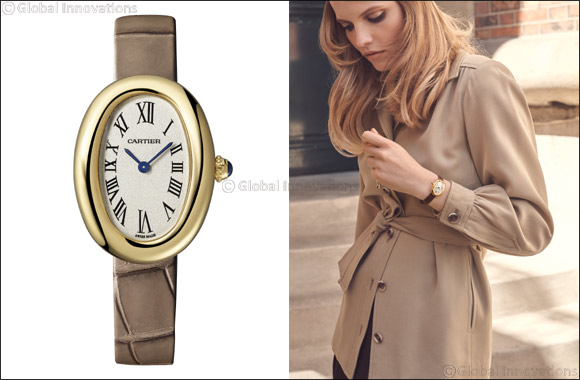 27, August 2019:  Revealing beauty in all  its   guises:   that  is an enduring concept  at   Cartier,    a   filter  through  which all creation is viewed and  an idea which gave rise to the  Baignoire.
It all began with an unprecedented  step taken to reveal  the creative power of watchmaking  design hidden in ordinary  forms.

Cartier  took   this  inspiration  quite literally  by   initially   designing  an oval  case in the  1910s that would later be transcended by several of formal research.

objects and embracing beauty are two key components of Cartier’s stylistic vocabulary and here this combined approach  resulted  in  the  birth  of  the   Baignoire  watch.

Baignoire watch is a signature  watch for women who  have their sights set high, who   for sake  trends and fashions  and choose this piece for its timeless French Chic.

It speaks to cultured women blessed with great taste such as Catherine Deneuve, Romy Schneider and Jeanne Moreau – women who are only concerned
with freedom and wit, in beautiful objects and life in general.


10 Reasons Why You Can't Miss This Weekend's Saudi International: From Superstar ...

“The field is looking even stronger this year – it's great to see more Americans ...

Interest in golf rising as Saudi International heroes get set to inspire sport i ...

Spanish golf star Sergio Garcia determined to make a positive impression at next ...

Why this is the right time for TMCs to automate their processes?