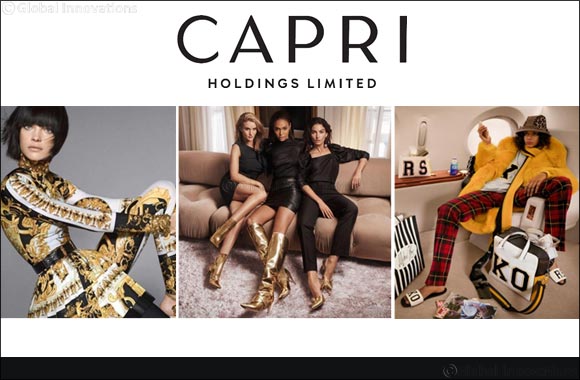 Share Home >> Fashion
January 03, 2019:    Capri Holdings Limited, a global fashion luxury group, announced today that it has changed its name from Michael Kors Holdings Limited (NYSE: KORS), and beginning on January 2, 2019, its New York Stock Exchange ticker symbol will be CPRI. The company is also pleased to announce that it has completed its acquisition of Versace.
John D. Idol, Chairman and Chief Executive Officer of Capri Holdings said, “With the acquisition of Versace, we have now created one of the leading global fashion luxury groups in the world. The new name for our group, Capri Holdings, is inspired by the fabled island which has long been recognized as an iconic, glamorous and luxury destination. The island’s spectacular three rock formation, formed over 200 million years ago, is symbolic of the timeless heritage and strong foundation that is at the core of each of the three founder-led brands.”
Mr. Idol continued, “Versace has long been recognized as one of the world’s leading fashion luxury houses, and is synonymous with Italian glamour and style. We are thrilled that the house of Versace is now part of the Capri Holdings family of luxury brands. We look forward to working with Chief Creative Officer Donatella Versace, Chief Executive Officer Jonathan Akeroyd, and their incredibly talented team to continue to drive Versace’s growth and success globally.”
Strategic Rationale
The acquisition of Versace is expected to deliver a number of benefits for Capri Holdings, including:
Transaction Details
As previously announced, Capri Holdings acquired Versace for a total enterprise value of Euro 1.83 billion (or approximately US$2.12 billion on the date of announcement). The cash portion of the purchase price was funded by a combination of cash on hand, drawings under its revolving credit facility, and bank term loans. Concurrently with the closing, the Versace family reinvested an aggregate of Euro 150 million of the cash received for their interests in Versace in exchange for 2,395,170 ordinary shares of Capri Holdings.

Live International Sport to Return to the Kingdom as Saudi Arabia's First-Ever W ...