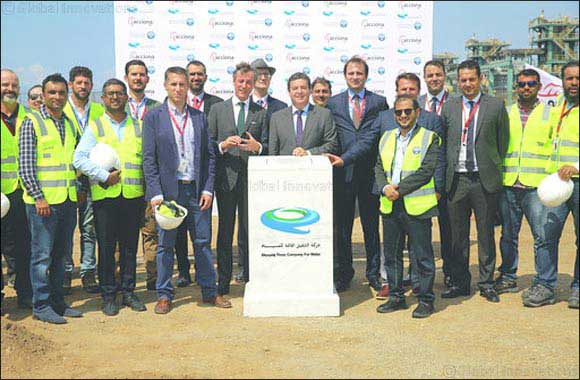 ACCIONA lays the first stone for IWP Shuqaiq-3, one of the largest desalination plants in Saudi Arabia

The event was held at the Shuqaiq-3 site, located on the Red Sea coast of Saudi Arabia and was attended by several top representatives and officials from Spain including the Councillor for Economic and Financial Affairs of the Spanish Embassy in Riyadh, Mr. José Ramón Ferrandis Muñoz. José Díaz Caneja, CEO of ACCIONA Agua business line; Jesús Sancho, ACCIONA ME Managing Director and Manuel Manjón, ACCIONA Business Development Director attended as well the event.

IWP Shuqaiq-3 EPC stage is scheduled for completion in 2021 and will be one of Saudi Arabia's largest seawater desalination plants. The plant utilizes the reverse osmosis technology with a capacity to produce 450,000 cubic metres per day of drinking water.

As several countries in the Middle East region are aligned with the international protocols on climate change and carbon emission reduction, it is an increasingly important priority to ensure a sustainable and cost-effective potable water supply.  Shuqaiq-3 embraces all these aspects, as it is an efficient and safe alternative to the thermal desalination technology. The Project shall guarantee the supply of drinking water to more than 1.8 million citizens, and thus contributing to the economic and industrial development of the Kingdom.

Additionally, Shuqaiq-3 represents an important milestone both at the economic and at the social responsibility level, as it is one of the largest desalination plants in the World and it will create several thousand jobs from the start of construction until the end of the 25-year concession. The Project is seamlessly aligned with the “2030 Vision” of Saudi Arabia since it involves a great deal of Saudi content and has, as its objective, the increase of private investment and local employment opportunities.

As part of the project's social outreach measures, in the first few years the Consortium will offer academic and practical training to residents in the area to nurture the development of water industry professionals in a region so in need of projects of this kind.

Increased Risk of Allergies for Residents in Saudi Arabia if Hidden Dust is Left ...

WTTC Recognises Saudi Arabia's Leadership to the Recovery of the Travel & Touris ...